What is Oak Wilt?

Bretziella fagacearum is the scientific name for Oak wilt fungus. It was first found in Wisconsin in the late 1940’s and has spread across the central and eastern United States over the last several decades. Oak wilt begins as a fungal mat on a dead Red oak that had succumbed to the disease the previous year. The mat is hidden under the bark and releases a pungent “fruity” aroma that attracts the nitidulid beetle. Once the beetle has come into contact with the mat, the fungus “hitches a ride” on the body of the beetle and when it invades a healthy oak, the fungus begins its spread of devastation. 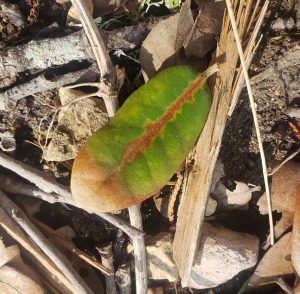 All oak species native to North America are susceptible to oak wilt. The White Oaks have been considered to be highly resistant to the oak wilt fungus in the past but now it is being recognized that they are only more tolerant and no less susceptible than Live oaks are. We have confirmed infections in Post Oaks, Lacey Oaks and Monterrey(Mexican White), and Bur Oaks. Red Oaks are the most vulnerable to the disease, dying within weeks of infection. This includes Spanish, Shumard, Texas Red and Blackjack Oaks. Live Oaks are also very susceptible to the disease. They tend to hold the fungus in their systems for months to years due to the continuous growth of the tree, especially during wet seasons. This can make identifying the fungus in the tree difficult because it doesn’t always show the classic leaf sign. 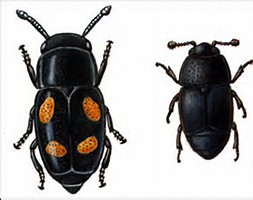 Oak wilt is spread in two ways, by the beetle or root graft. The beetles fly to healthy oaks and feeds from open wounds caused by irresponsible Tree Trimmers, squirrels, woodpeckers or high winds in the upper branches. The water conducting vessels (the xylem) are exposed to the beetle-carried spores as the insect feeds from the open wounds. Once established, the fungus can move through the tree’s vascular and phloem systems, resulting in systemic infection. 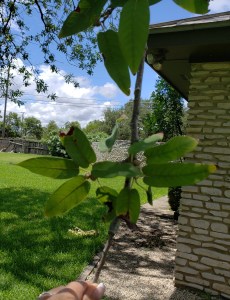 The initial fungus spread is relatively slow and the developing infections are not apparent until the fungus moves into the larger branches and then rapid wilting will occur. 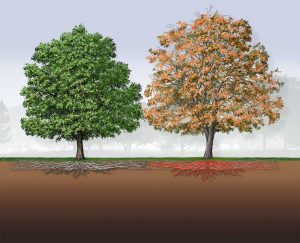 The disease is also spread from the same species by interconnected root grafts. During our field research we have seen that trees infected through root grafting can can survive for a long period of time or they can seem to suddenly wilt and die. Live oaks that are in groups usually are “clone” trees and the infection can wipe out the entire stand within months of getting infected. Trees cut at the wrong time of year when the beetle is out and about do seem to react relatively quickly to the fungal spores and can die within a few months of being infected. These are just our observations and not necessarily typical to all oaks where Oak wilt is found. We also recommend treating any oaks near an infection center before removing any dead trees. Although the tree may have lost leaves, the fungus still continues to consume the tree inward toward the center and outward toward the cambium. Removing it can cause the fungus to move back through the roots in search of another live host that may be grafted to the dead oak. 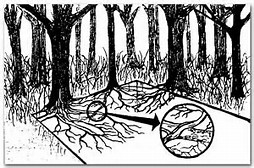